Reduced shipping for orders starting at 200 € - bound for Holland.More on shipping

Until 2017, "Jamón de Jabugo" was ham that had been produced and prepared in Jabugo (Huelva, Spain), a village that belonged to the Jamón de Huelva Designation of Origin and had a total of 26 producers registered with the Producers' Association. Now, this D.O. has been renamed "D.O. Jabugo", and therefore only hams produced by the D.O. members can be labeled and considered as Jabugo hams.

The village of Jabugo

Jabugo is located in the Sierra de Aracena y Picos de Aroche nature park, in the northern part of the province of Huelva (Andalusia, Spain). Situated 658 meters above sea level, it has a population of 2,600 inhabitants.

In Jabugo, productive activity essentially revolves around the holm oaks, grains, olive trees, pigs and pork products (jamones and chacinas) for which it is famous. Legend has it that jamones were created when a pig one day fell into a gully with very salty water, and drowned. Shepherds found the pig and roasted it, discovering that the meat - particularly the hind leg - had a pleasant flavour. Later they discovered that when the hind leg was salted it lasted longer without losing its flavour, and the method was thereafter perfected. Today, spanish Iberian ("Ibérico") jamon constitutes one of the world's most exquisite products.

Pigs and the "dehesa"

Pigs pasturing in a Jabugo dehesa

Pigs here are either pure Iberian breed (black and "retinto") or Duroc-Jersey crosses with 75% Iberian blood. In Jabugo there is also a native strain known as "Manchado de Jabugo" because of the white spots on its skin ("manchado" translates literally as "stained"). Its flesh is red, and its fat is very soft and grayish-yellow in colour.

Pigs begin foraging upon reaching a weight of about 90 Kg, and continue until attaining their ideal weight of around 170 Kg, between the months of January and February.

They grow in an ecosystem, the "dehesa", that is similar to the dehesa de Extremadura: large tracts of sparsely wooded land with scattered trees, mainly holm oaks. Iberian breed pigs are the only animals of this species in which stored fat is redistributed thoughout the body, infiltrating the muscle fibers. When the pig has consumed a diet with a high acorn content this fat is of superior quality, giving the flesh its characteristic texture, aroma and flavour. 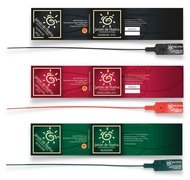 Salting of Jabugo jamones is done with sea salt. Jamones then undergo a natural drying and maturation process in a bodega for a total of almost 3 years, after which they are tested. For this purpose a tibia bone from a horse or cow, or a fine, sharp wooden tool is inserted into each of the three jamon joints to determine whether it has completed the final stage of the curing process and acquired optimum flavour for consumption.

Jabugo jamones are long and slender, with the characteristic shape given by the V-shaped "Serrano" cut, as it is known; they also bear a brand mark on the skin. The hoof is black, and the outer fat is soft and smooth in texture. They are notable for the quantity of fat marbling their flesh, giving them a delectable texture.

The jamon curing process takes from 18 to 30 months from start to finish, including cutting, salting, washing, drying and maturation. Depending on the weight of the jamon the curing time may be longer. For paletas, which are smaller, the curing process lasts between 10 and 18 months, although larger pieces may take longer.

Jabugo jamon provides the most intense flavour and longest-lasting aftertaste of all. Guijuelo jamon, on the other hand, usually has the most delicate flavour, while jamones from Extremadura and Los Pedroches are of intermediate strength. This difference is not primarily due to the raw material, but it is influenced to a large extent by the production process employed and the area in which the curing process takes place. The Sierra de Huelva is warmer and more humid than the region of Guijuelo (Salamanca), and this means that a little more salt is required to prepare the jamon. The native floras - both bacterial and mycological - influence the complex metabolic processes that the jamon undergoes during its maturation in cellars, lending it a unique bouquet.

In 2014, the Producers' Association of the "Jamón de Huelva" Designation of Origin awarded certification of maximum quality ("Bellota Summum" Iberico products) to 35.166 jamones, most of them from Jabugo, Cumbres Mayores, Cortegana y Aracena.