Although traditionally pigs have always been reared in pens of a few square metres, zones with an abundance of acorns have also been very common grazing areas for pigs in the fall, coinciding with the falling of the fruit of the oak.

It was an inexpensive way to fatten the animals. There were thousands of hectares of pastures in Extremadura, the north of Andalucía (Huelva, Córdoba, Sevilla) and the south of Castilla y León (Salamanca, Ávila), some municipally owned (communal) and others private, but they offered the right to graze for very little money.

In fact, the existence of large tracts of oak forests is what has allowed the Iberian breed, the Pata Negra pig, not to become extinct. It is the breed of pig best adapted to the environment: agile, strong, able to travel long distances, go up and down hills, with substantial amounts of fat to survive the cold mountains of around 1,000 meters altitude. Most of the more commonly produced white pigs wouldn’t survive, so in these areas the Indigenous Iberian breeds resided.

The swineherd (also called caregiver) has to control all the animals on a daily basis and identify any problems such as illness, boar attacks, or the quality and quantity of acorns and grass. They need to be extremely familiar with the farm (although it has hundreds of hectares) and know exactly to which areas he or she has to lead the animals. First, when pigs are still thin and agile, they will be led to higher altitudes. Later on in life they will stay on the plain. 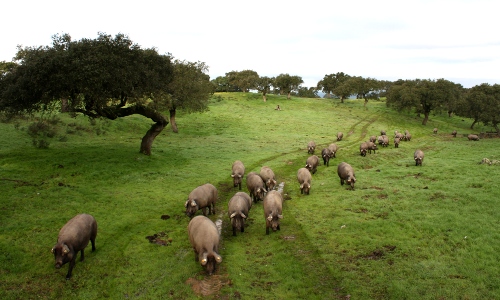 Iberian pigs been herded from one area to another in a pasture on the border of Spain and Portugal.

The period of time the Iberian pig spend in the field (the montanera) is the most critical of the whole process of making a jamón de bellota. For 2, 3 or even 4 months, the pig must stay healthy and eat at a steady pace: not too much, not too little. If you overeat you lose mobility and develop excess fat. You don’t want it to walk a lot, let alone climb hills. The pig will just lie on the grass or mud until hungry again.

On the other hand, if a type of disease is not detected early enough it may affect the animal in a way that would make it lose hunger and consequently weight. And if when during recovery there aren’t enough acorns then there will be no choice but to feed and fatten them with fodder and its eventual market price will drop significantly. In addition there is also the risk of the epidemic spreading to the rest of the herd in just a few days.

Swineherd of Iberic pigs and caretaker of the pasturelands during the 2011 montanera period.

Unlike the shepherds and goatherds, during the montanera pig keepers will often go motorized. They don’t spend time with the animals, nor are they with them while they eat. They only look for them and lead them to the grazing area where they are to spend the day, and usually won’t find them again until sunset. The rest of the time is spent mainly on maintenance of the farm, such as repairing roads and hundreds of kilometres of stone walls that separate the grazing areas. It’s also critical to keep the pasture free of weeds and shrubs, which provide shelter to the vermin and other inhabitants of the pasture.

Pigs, unless they are very hungry, aren’t at all dangerous. They are more fearful of humans and usually don’t approach us. However, all swineherds tell the same story to children: that in his village a child entered a pigsty and pigs left nothing, not even the bones. It’s the gory version of what is officially called the Manual of Labour Risks and incidentally is much more convincing.